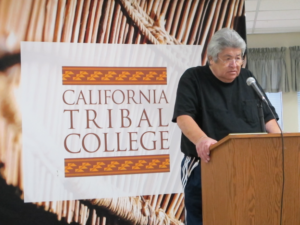 With the endorsement of more than 40 California Indian nations and organizations, a new nonprofit tribal college will open in northern California in 2014 with the aim of serving American Indian students from the state.

Last week, Marshall McKay, chairman of the Yocha Dehe Wintun Nation, announced plans for what is known as the California Tribal College during a statewide Indian nations conference at the California State University, Sacramento campus. While planning for the new school has been underway since 2009, McKay confirmed that tribal college development efforts are “well on [their] way to making this dream become a reality” during a keynote speech for more than 200 representatives from California Indian nations, higher education institutions, local organizations, and news organizations.

“The Yocha Dehe spearheaded an initiative to establish a California Tribal College several years ago in this great state where we have the largest populations of Native Americans and not one functioning tribal college,” McKay told conference attendees.

Next year, “we will finally see California add an accredited tribal college to the list of 37 others in this country,” he added.

McKay chairs an interim board of regents that includes other members from Yocha Dehe and representatives from the Little River Band of Pomo Indians, the Morongo Band of Mission Indians and the Rincon Band of Luiseño Indians. He said the California Tribal College, which will offer undergraduate degrees and certificate programs, will place an emphasis on courses in American Indian culture, languages and government.

“There is nothing more important for Native people and our tribal futures than the education of our young people,” said McKay. “Our strength depends upon educating our next generations in the history, language, and government of our tribes.”

From 1975 to 2005, California Indians had access to D-Q University, formerly the state’s only tribal college. The school closed down after losing its accreditation following years of internal conflict and financial problems.

Marilyn Delgado, director of the California Tribal College, told Diverse it has yet to be determined whether the new college will be a two- or four-year undergraduate institution. She said that launching the tribal college will enable educators to help address the wide diversity of American Indian youth in California.

“We are a state with the highest number of Native Americans and two-thirds of those people are not from California tribes. We have the largest Native American population, yet we do not have one tribal college,” Delgado said.

“A lot of our Native youth in California have difficulty accessing tribal colleges in other states, or accessing college,” continued Delgado. “They don’t feel comfortable in many mainstream colleges and so that’s why we’ve pushed this initiative.”

Tishmall Turner, the tribal liaison for California State University, San Marcos, told The Sacramento Beethere’s considerable need for new college opportunities for American Indian high school graduates. “The number of Native American youth attending California colleges has declined over the last decade,” she said. “Our goal is to serve as many as possible.”

Delgado said completion of a tribal college feasibility study in early 2014 will answer a number of questions over how the school will be developed, including whether it will be a two- or four-year school and where it’s likely to be established. McKay has indicated that the Sacramento region would be a logical choice for the new college given the proximity to the Sacramento airport and the availability of suitable real estate, according to The Sacramento Bee.

The project has garnered at least two significant donations. The investment banking firm of Goldman Sachs has donated $290,000, and the Seven Post Investment firm has pledged $150,000, according to tribal college officials.

We use cookies on our website to give you the most relevant experience by remembering your preferences and repeat visits. By clicking “Accept”, you consent to the use of ALL the cookies.
Do not sell my personal information.
Cookie settingsACCEPT
Manage consent

This website uses cookies to improve your experience while you navigate through the website. Out of these, the cookies that are categorized as necessary are stored on your browser as they are essential for the working of basic functionalities of the website. We also use third-party cookies that help us analyze and understand how you use this website. These cookies will be stored in your browser only with your consent. You also have the option to opt-out of these cookies. But opting out of some of these cookies may affect your browsing experience.
Necessary Always Enabled
Necessary cookies are absolutely essential for the website to function properly. These cookies ensure basic functionalities and security features of the website, anonymously.
Functional
Functional cookies help to perform certain functionalities like sharing the content of the website on social media platforms, collect feedbacks, and other third-party features.
Performance
Performance cookies are used to understand and analyze the key performance indexes of the website which helps in delivering a better user experience for the visitors.
Analytics
Analytical cookies are used to understand how visitors interact with the website. These cookies help provide information on metrics the number of visitors, bounce rate, traffic source, etc.
Advertisement
Advertisement cookies are used to provide visitors with relevant ads and marketing campaigns. These cookies track visitors across websites and collect information to provide customized ads.
Others
Other uncategorized cookies are those that are being analyzed and have not been classified into a category as yet.
SAVE & ACCEPT
Scroll To Top